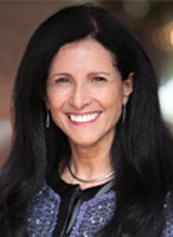 Mimi Grant is President of the Adaptive Business Leaders (ABL) Organization, which provides monthly Round Table forums for CEOs, Presidents, and Division GMs of Healthcare companies throughout California, and for Technology companies in the southland. For over 25 years, she has facilitated monthly Round Tables and Membership-wide events, where Members exchange high-level future-focused insights, connections, and practical ideas for each Member’s profitable growth. In addition to shaping the company’s strategic direction, Mimi is the publisher of “ABL Online,” a bi-monthly electronic newsletter to help ABL Members stay on the cutting-edge of the issues that can most significantly impact their businesses, and blog and vlogs on similar topics.

Mimi took responsibility for ABL’s nascent Healthcare division in 1990, when it had one fledgling Round Table. Today ABL Healthcare Members meet in five monthly CEO Round Tables throughout California, in Los Angeles, Orange Country, San Francisco, Silicon Valley, and Oakland. She began co-facilitating ABL’s Technology Round Tables and directing conference activities in 1985, and has been particularly involved at the nexus point of tech-enabled healthcare ever since, remaining an active co-facilitator of ABL’s three Technology Tables with Bob Kelley.

Prior to her involvement in ABL, Mimi co-founded and was President of Five Star Marketing Services, an advertising/PR firm, and Five Star Productions, its AV unit. Five Star provided a wide range of marketing services to over 50 clients in 35 industries. Later, she founded weCan, the Women’s Economic and Career Advancement Network, for professional development. Mimi began her career with ad agencies BBD&O and Foote, Cone & Belding, before moving into PR management with Mazda Motors of America and Knott’s Berry Farm.

Mimi holds a BA in Communication Arts from Loyola-Marymount University’s (now) School of Film and Television, from which she graduated magna cum laude, and was named to two national honor societies. In 1984, she graduated from the Harvard Business School’s Owner/Presidents Management Program; and, in 1989, the Japan Study Program for International Executives, conducted in Tokyo and other major industrial cities throughout Japan. In 1997, Mimi was selected as a Finalist for Ernst & Young’s “Entrepreneur of the Year” Award. An avid traveler, she is also active in her church, on a local and regional basis, and is a Trustee of LA’s Good Samaritan Hospital.