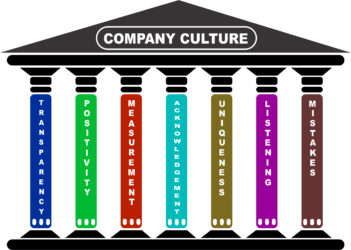 02 Oct The “7 Pillars” of Company Culture: For greater productivity, performance and profits

A couple of weeks ago I wrote about the importance of a company’s culture – based on a foundation of values, mission, vision, and even taglines. My principle source was Chris Dyer, ABL Member and bestselling author of The Power of Company Culture. With this blog I’ll be sharing Chris’s “7 Pillars” that rise from that foundation for building a culture that improves productivity, performance, and profit, with examples primarily drawn from our ABL Members.

A primary pillar is TRANSPARENCY. Our East Bay Member Cindy Hatton is the CEO of the not-for-profit Hospice East Bay, which has an engaged culture, built on compassion, respect, and kindness. This culture creates a positive environment for the staff, who believe and live their mission, putting patients, families and quality first. She’s also a huge believer in both transparent financials and goal-setting with her team. While some organizations are hesitant to share “the numbers” with their employees, Cindy believes everyone should know the importance of having a positive bottom line, so they can maintain their leadership in a competitive market.

Another pillar is ACKNOWLEDGEMENT. San Francisco Member Eric Neuner’s Health Coach Institute brings together thousands of the health coaches they’ve trained in regular “HCI Live” sessions held in several of the 30 countries in which their 20,000-plus coaches reside. A key aspect of these upbeat sessions is acknowledging the men and women who overcame really tough circumstances to become successful coaches. Their website is replete with testimonials from their coaches who are changing lives – and building good businesses – by coaching their clients to frequently make life-saving behavior changes.

One of the defining characteristics of UNIQUENESS is having your own language. Chris gives the example of Walmart, where all of their 2.3 million employees know that EDLP means “everyday low price.” To discover more about Walmart’s “secret language” I found a subsection on Reddit called Walmart/Acronyms, which included that: “OSA” means “on shelf availability,” and a “Hodge” is “merchandise that’s misplaced or left in the incorrect location.” Walmart even originated “Code Adam,” which is now ubiquitous for a “lost child.” By the way, employees aren’t reprimanded, they’re “coached,” but after the third coaching, you’re out – according to HashBrownAsh, an “OTC TopstockBoss,” which means he or she is in charge of putting extra merchandise, like aspirin, on that top shelf (that I can barely reach) in the pharmacy’s over-the-counter section.

The MEASUREMENT pillar is to ensure businesses act on objective information as often as possible. For example, at last month’s Technology Round Tables, Bob Kelley, ABL’s CEO, presented several Key Performance Indicators (KPI’s) that are frequently used by sales departments as metrics for assessing customer development. Just a few of them are: number of products or services sold, new customers acquired, the number of current customers who became referring customers, and the “Net Promoter Score” for measuring customer satisfaction level – with the now famous question: “On a 0-10 scale, how likely are you to recommend [whatever] to a friend or colleague?”

Chris believes promoting LISTENING leads to more effective teamwork both inside and outside the office – because “Being Heard” is one of the top drivers of employee engagement. As for outside, he gave the example of fellow Round Table Member and Great Listener Dave Berkus, who’s chairman of multiple portfolio companies, who always listens very attentively to whomever is the Featured Member making his or her Strategic Advisory Board presentation to the Round Table. Then, only after he’s heard the full presentation, does Dave give his very thoughtful feedback.

When it comes to the MISTAKES pillar, Chris differentiates between errors and mistakes; defining errors as something simple that you did wrong, which should have been right: like misspelling words in marketing materials; or worse, miscalculating payroll. The four principle causes of ERRORS are carelessness, overwork, multi-tasking, and low aptitude. As with Walmart, training and support may well solve the problem. Mistakes, on the other hand, are often the result of taking calculated risks, which sometimes pay off spectacularly, even if they didn’t achieve the original objective, such as 3M’s most famous “mistake” that resulted in Post-It Notes.

The seventh Pillar of Company Culture is POSITIVITY. Because positive energy is contagious, when wrestling with a problem, Chris recommends identifying first “What is Working?” One of the methods he profiles is Appreciative Inquiry as a great way to take the “problem” out of “problem solving.” Our West LA Tech Member Lisa Perrine, CEO of Cibola Systems, is a strong advocate of Appreciative Inquiry’s question-asking approach, adding additional questions like: “What are we most proud of today?,” and “What might we do to be more like this?” She also recommends a blending of “Appreciative Inquiry’s 4-D cycle” with the “5 stages of Design Thinking,” beginning with Discovery – or Identify and Define: to identify and appreciate what works; then Dream – or Ideate: imagine what goal might be attained; Design – or Prototype: by developing systems and structures, leveraging the best of what was and what might be; and Destiny – or Test: which is the implementation or delivery phase of the proposed design.

While talking with Lisa, she also suggested a quick survey you can take online for free. It’s called the “OCAI – Organization Culture Assessment Instrument,” and in about 15 minutes you can find out where you are – and where you want to be – in their six areas for measuring “a more positive and productive culture.” While they do offer “pro” and “enterprise” versions starting at $597, at www.ocai-online.com, the rest of your team can also take the “OCAI One” at no cost, then you can compare results. The idea is, the more coherence there is among team members towards creating a culture supportive of reaching the company’s goals, the more likely you are to achieve them.

Bringing all of these Pillars together for some closing comments, is ABL Silicon Valley Member Steve Grau, the CEO-Founder of Royal Ambulance, which was recently named to Modern Healthcare‘s list of “2018 Best Places to Work in Healthcare,” nationally. When asked which of these 7 Pillars Steve felt were most responsible for Royal’s success in building an amazing corporate culture, he responded: “During our first ten years, we built a very family-oriented organization where elements like “Positivity” and “Listening” were key. However, in the last few years, as we evolved our organization and needed to have a larger focus on achievement through execution, Transparency, Measurement, and Acknowledgment have proven to be most effective in getting results. As Lean practitioners, we practice consistent and Transparent goal setting and alignment, which leads us to accountable discussions focused on Measurement and communication around KPI’s, followed by Acknowledgement and recognition of a job well done.

So there you have it: 7 Pillars, one book, and a free survey, to help you strengthen what’s probably already a strong corporate culture, or you wouldn’t be reading this blog! Wishing you the greatest success on making it even stronger, Mimi